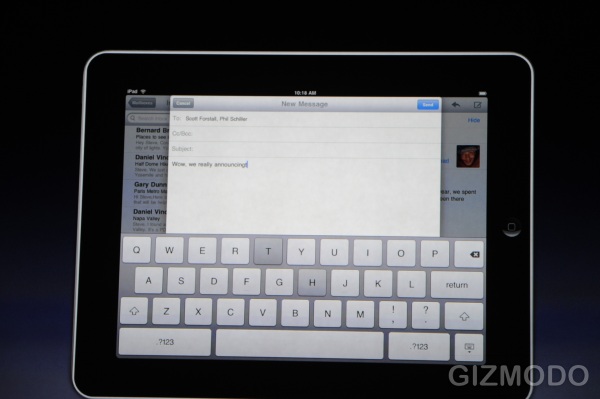 We first told you about the Apple Tablet in July 2009 and the rumors are now over! Calling it “way better than a laptop and way better than a phone,” Apple CEO Steve Jobs unveiled his company’s long-awaited iPad tablet-style multi-touch device today (Wednesday 27th Jan 2010). The device weighs just 1.5 pounds — lighter than any netbook, Jobs noted — and sports a 9.7-inch display. Jobs noted that the hardware is a “dream to type on,” and demonstrated how to read, view media and content and access applications on the hardware.

“You can discover music, you can purchase it,” Jobs said. “Movies, TV shows, podcasts, iTunes University — everything built right in.” The hardware has many of the same capabilities of the iPhone and iPod touch, including an orientation sensor for switching between portrait and landscape modes, and multi-touch capabilities. The device even looks akin to a large iPhone.

Steve Jobs demonstrated sending e-mail, reading content and flipping through photos. Places that photos were taken could be viewed through the integrated maps application. It also allows a photo slideshow that works much like in iPhoto.

The touchscreen keyboard takes up half of the screen when the device is used in landscape mode. Jobs also demonstrated a calendar application that looks much like the Calendar app available on the Mac OS X desktop. He also showed off buying and listening to iTunes content on the iPad, demonstrating high-definition clips from movies like “Up” and “Star Trek.”

Check a video of the long-awaited launch at Gizmodo.