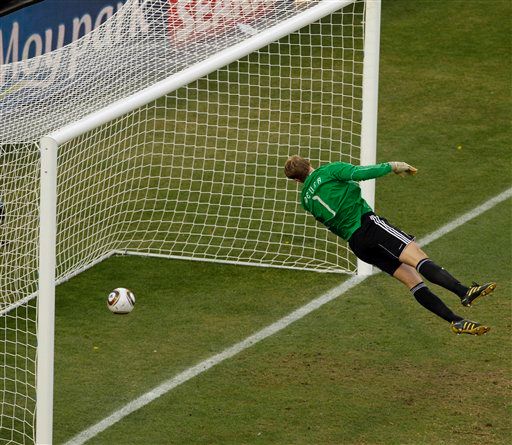 Memories don’t live like people do, they will always stay with you.

From the Zinadene Zidan head-butt on Materazzi in the 2006 World Cup Final, to the flying-kick on Alonso by De Jon in this years final game in South Africa, football has some moments that are shocking, pure genius, funny or just simply touching…Like Casilla’s snog on his reporter-girlfriend during an interview soon after Spain were crowned Football’s World Champions 2010 yesterday in South Africa.

Some moments are so memorable, you wonder why the TV Broadcasters don’t show them at all, for example, did you see…

that man who tried to steal the FIFA World Cup Trophy in front of the whole stadium and the world? No, me neither! He was knocked out by on of the security guys, which must have surprised the silly guy that the trophy is heavily guarded!

Luckily, thepctool.com has been using available technology (Gif Animator 5) to capture some of the most memorable world cup 2010 football moments for your consumption. Enjoy and share your thoughts in the Comments 🙂 This was not broadcast by the authorities: the guy wearing a JimmyJump.com T-Shirt came charging towards the Golden Trophy during the final game of the tournament between Netherlands and Spain. He must have been “surprised” by how well this valuable thing was guarded because he was knocked out by one of the guards and he looked out cold as he was dragged away by a posse of bouncers!

What Zidane can do De Jon can do better! Yet again we witnessed thuggery in a World Cup Final but unlike in the last one when the perpetrator saw red, this time the offender got away with only a yellow card! Mr. Webb the English referee infuriated a lot of people by trying as hard as he could not to send anyone off in this game…but he still did later on and inevitably it was a dutch who saw red.

Technology is great and it has enabled all mankind to study all kinds of things with super slow motion precision. Look at the physics and relationship of those cheeks and lips!

He is Spain’s World Cup Winning Goal Keeper and she is Spain’s most popular TV reporter, so when Sara Carbonero was interviewing Iker Casilla she received a forceful snog live on air! Awwww…. But earlier in the tournament it was very different when she interviewed him after Spain lost their first game, and people blamed her for the loss because she was standing right behind his goal during the game!

This looks like a traditional ritual until you realize its a young fan enjoying his ice cream too much!

England goalkeeper Green fumbles the ball into his own net:

He was the Number 1 England keeper oh so briefly! He didn’t play again after this mistake which, like many blunders, was blamed on the new balls.

The Black Stars fans were amazing and this one just sums up Africa nicely: colorful, beautiful, fun and no worries!

Holland player getting an overhead kick to the face:

Holland dished out some seriously rough treatment to their opponents but here is one of them getting a taste of their own medicine. Ouch! By the way, if this is a foul, how are you supposed to do a bicycle kick?

England’s John Terry defending with his life by diving in front of a shot:

He looks like he is only trying to swim in the air! What about the other defender, Glen Johnson, defending his crown jewels first! Boys salute you.

Argentina had just finished celebrating another goal when Defender Gabriel Heinz turned round and banged his face into a camera that was unusually close to the action. It must have really hurt because the instinctive reaction from heinz was to whack the camera so hard the poor cameraman must have got a black eye from it!

Christiano Ronaldo had a terrible tournament by his high standards so he was frustrated, but many still cant understand why he stirred up a full blooded spit (or flem!) straight towards a camera to the whole world. Eeewwww.

He takes free kicks like Ronaldo and moves like him. He posseses the skills of Ronaldo and that is why Honda is dubbed the Japanese Ronaldo!

The Ghanaian player went down after an invisible trip from Uruguay’s Suarez and tumbled over getting back up to his feet in one smooth, almost balletic motion!

Tevez shot in the face:

Argentinian striker Carlos Tevez volleys the ball hard into a German player’s face who luckily has a nose of steel!

Ref asking Fabiano if he used hand to score

“Did you use your hand? Be honest,” The Ref asked Brazil’s Fabiano after he had controlled the ball with his hands twice before scoring a goal against Nigeria. “No no no!” The striker replies, to which the Ref then says, “oh it was the chest wasn’t it?” As if any self-respecting footballer would say otherwise!

Brazillian play maker Kaka got himself sent off for this shoulder charge on a Nigerian player, who must be given an audition for action movies after going down clutching his face as if he had been shot by an arrow between his eyes! When England’s Frank Lampard scored his first ever world cup goal, everyone saw quite clearly that the ball crossed the line by a mile! Except those who mattered, that is the Ref and Lines Men. A solid case for Video Technology to be introduced maybe with 3 challenges a team, like in Tennis. If FIFA continues to refuse the adoption of video in the 21st century, then it must be only for personal reasons and not for the good of footy. Come on FIFA, as Dizzee Rascal would say, pull your finger out! Finally the moment that sparked a massive debate about fair play, morals and the present FIFA rules. “When a player other than the goalkeeper stops the ball from going into the net, it is a penalty” But wait, is it not a goal instead? Well the debate rages on with the whole of Africa feeling cheated and Ghana in particular being denied a first historic Semi-Final place for an African team. When Uruguay’s Suarez played volley ball with the last kick (head!) of the game, he became an instant hero back home for his sacrifice (a red card meaning he missed only one game!) and a villain everywhere else. He was constantly booed when he came back to play their last game in the third-place play-off against Germany which they lost. Ironically, just like Ghana in that unfair game’s ending, Uruguay also hit the bar with the last kick of the ball! What goes round…eeh?

Tell us what your most memorable world cup 2010 football moments were by leaving a comment below.

We were a disgrace in the final which is why we lost… well that and the fact that Spain were better. Should have played Total Football like our Dutch Masters taught us. Most memorable for me is the goal by Giovanni van Bronckhorst – that ball did not move left or right, it was like a darting arrow! Holaaaaand till I die!

It wasn’t that bad and you did very well, unfortunately no one remembers the 2nd placed team 🙁
I think my goal of the tournament has to be Brazil’s Maicon 🙂

Jimmy Jump does this sort of thing a lot, he threw a red hat onto the trophy but he did not reach it. My moment? Spain lifting the cup will live with me forever! VIVA ESPANAAAAAAAAAAAAAAAAAAA

Well done to you!

Great collection though there’s more….somewhere!
Bookmarked and shared this 🙂

Your welcome, glad you enjoyed. You’re also right, there is more out there, like the BBC3 show “World Cup’s Most Shocking Moments 2010” 🙂