Home  ›  All  ›  Fabio Capello Index Website Is Not Genuine 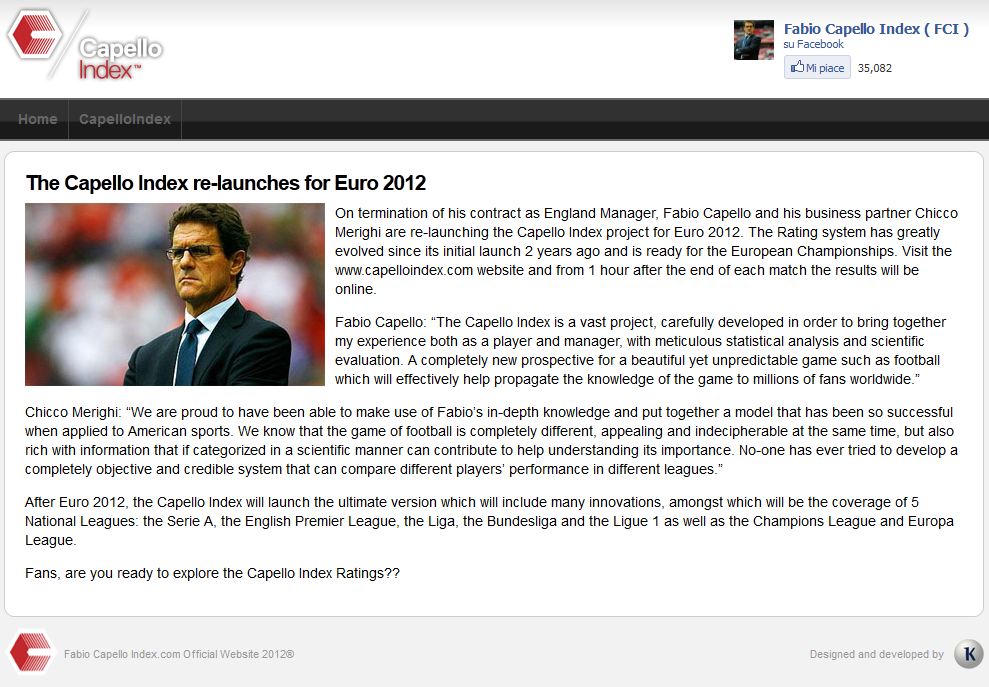 CAPELLO INDEX IS BACK!

Below is the announcement that former England Manager Fabio Capello is now endorsing the website that he had previously disowned and distanced himself from while still in charge of the England football team: Fabio Capello has disowned his own CapelloIndex saying that he has neither seen nor approved the player ratings appearing online. He claims that the capello index website is not genuine. The English FA (Football Association) is now trying to get the capello index out of the public domain. The FA has said that Fabio Capello will have nothing to do with the Capello Index project as long as he is England Manager.

The Capello Index was unveiled a day before the England Football Team Manager named his 23 man squad for the World Cup 2010 held in South Africa. He was accused of stealing the idea from a Norwegian Businessman.

Controversy about the Index spread wildly because Capello was supposed to rate players performances  during the tournament, including the England Team’s players, whom he was managing. He explained that if players received a bad index due to their poor performance, it may encourage them to do better. He had to postpone his idea until after the tournament. The Capello Index Website has just published what it implies are Capello’s ratings for his England Team’s players, and they are interesting to say the least! Striker Jermaine Defoe is revealed as the highest ranked English player with 62.47 while the worst performer is goalkeeper Robert Green with 51.67 after his mistake led to an equalizer for USA in their first game. Other players that get poor ratings after the poor display by his team in South Africa are Joe Cole, Ledley king, Aaron Lennon, Gareth Barry and Glen Johnson. Wayne Rooney gets a score of 58.87 and Emile Heskey does better with 60.15.

The website also claims to have Fabio Capello’s Blog.

They revealed that the worst performers were Robert Green, Joe Cole, Glen Johnson, Gareth Barry, Ledley King and Aaron Lennon. No England names appeared in the top 45 players from the tournament, which was headed by Uruguay’s Diego Forlan with 68.95 per cent. Jermain Defoe was given the top English mark of 62.47, based mainly on his performance in scoring during the group game against Slovenia. Green, whose blunder allowed the United States to draw in the opener, was bottom with 51.67.

Even if the Capello Index website is not genuine, it is certainly making a valiant effort with a promise of ranking players from the English Premier League (EPL), the UEFA Champions League (UCL), Spain’s La Liga and Italy’s Serie A. Capelloindex.com claims to be a sophisticated football player ranking system “created to benefit all those football lovers that rarely have the opportunity to use an in-depth, objective and understandable analysis system.” It is similar to the Opta Football Stats System which is widely used in the English Premiership.

A statement on the Capello Index Website states: “We are finally able to satisfy the numerous request we have had by publishing the results of the evaluation of the players’ performance during the South African World Cup. As you may well know, out of respect to the Football Association, who asked us to suspend the real-time publication, we decided to wait until the end of the tournament. With the start of the 2010/2011 football season there will be many novelties, therefore we await all your thoughts and observations as together we can only improve our product. You can access all our results at worldcup.capelloindex.com Enjoy!!” The website and the England players Capello Index is still live online as of this article and can be found here. You will have to search for the English Players names to get their ratings because the country “England” is not available under the “All Teams tab.”

Do you agree with the Capello Index?

What has it gotten you?

at the very least, I got some alternative footy ratings other than the similar mainstream content 😉

I wish it worked out bcoz his opinion matters more than others…but as it happens now, it’s just a lame duck!

You’re right, it would have been interesting at the very least!

We it is now up and running again finally…

As you can c here:

Thank you Sebastian, the article is updated.