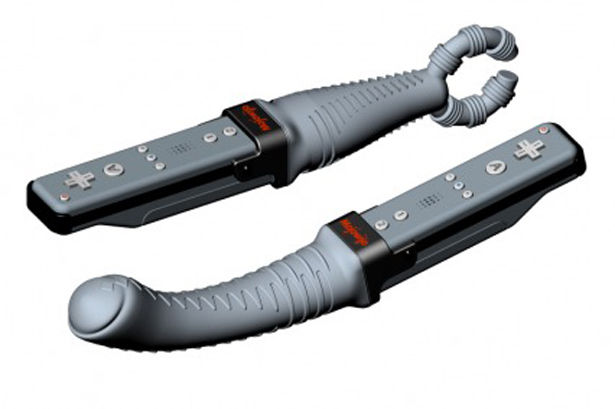 And that’s not all, it comes (am so sorry) in two parts: one for ladies and one for men – which looks more like one of Robbie the Robot’s claw hands, but you get the idea. And they’re designed to work in tandem.

Basically, the Wiimote, once bedecked with rudery attachment, links to your PC via bluetooth and the Mojowijo software. Then it pairs with another Wiibrator either in the same room or across the expanse of the Internet, and, using the company’s Motion2Vibration technology, whatever actions one device makes, the other repeats in a buzzing fashion.

Obviously, the application for adult chatrooms (such as Chat Roulette) is in equal parts ingenius and thoroughly scary! And, if you can’t find somebody else to Mojowijo with, at least you’d have an all new way to play Mario Galaxy.

The Wiibrator’s not actually available yet (and am not entirely sure if it ever will be – I doubt Nintendo will be keen), but its designer is currently inviting interested parties to join its Beta Test program at www.mojowijo.com (…wait, whats the rush? At least wait till you’ve finished what you’re doing!)